Anyway, for those of you who are really confused right now, Haman and Esther are people from the story of Purim, a Jewish holiday coming up on March 4th. If you want to read up on the story of Purim you can Google it and do that on your own time, but just for some context: Esther, a beautiful Jewish woman, was the Queen of Persia, and Haman, an evil Jew-hater, was the king’s royal adviser. Long story short, Haman wanted all of the Jews dead, Esther foiled Haman’s plot, Haman was hanged, all of the Jews survived, and here we are today.

To bring it full circle, today Jews celebrate the story of Purim by eating triangle shaped cookies called hamantaschen, created to resemble the three-cornered hat that Haman supposedly wore (my hat, it has three corners…). Traditional hamantaschen consist of a very plain tasting dough filled with fruit preserves or poppy seed filling. What I have for you today is a modern and fun take on hamantaschen, although you can really never go wrong with traditional ones. These hamantaschen are inspired by the second most popular Girl Scout cookie, Samoas. Like Samoas, these Samoa Hamantaschen involve sticky sweet caramel mixed with toasted coconut and dipped and drizzled in chocolate.

Before we begin, I have a few tips if you decide to make these:

I’m only half kidding. All hamantaschen are labor intensive because they involve making the dough, rolling it out, cutting out circles, stuffing with filling, pinching the cookies closed, and THEN baking. These hamantaschen involve the additional steps of making the filling and then dipping them in chocolate and drizzling with chocolate at the end. Don’t get me wrong, these hamantaschen are truly unique, delicious and definitely very impressive, they just take so much time and effort. I would also like to note that I made some changes to Kitchen Tested’s original recipe, including halving the amount of cookie dough, that will probably make it more of an enjoyable experience to make these. However, I really do recommend that if you make these, you do it as a group activity on a weekend afternoon. If I haven’t scared you away (just being honest), follow the steps below:

To make the dough, beat together margarine or Butter Flavor Crisco (notes on that in the recipe below) and sugar. Then beat in heavy or whipping cream and vanilla extract. Once everything is completely combined, add in the flour one cup at a time with the beaters on low-medium. The cookie dough will look crumbly like it does in the photo above. Then, use your hands to squeeze the cookie dough together and wrap it in plastic wrap to store in the freezer for 10-15 minutes.

While the dough is in the freezer, make the filling. Start by microwaving caramel and a little bit of water in 30-second increments until you have smooth melted caramel.

Then, spread the shredded coconut on a tray and bake in an oven or toaster oven on 350 for 5-10 minutes. Mix the coconut around every 2 minutes or so to ensure even toasting (which I clearly did not do, as evidenced below). You want the coconut to be lightly browned, but it goes from lightly browned to burnt very quickly so keep an eye on it. 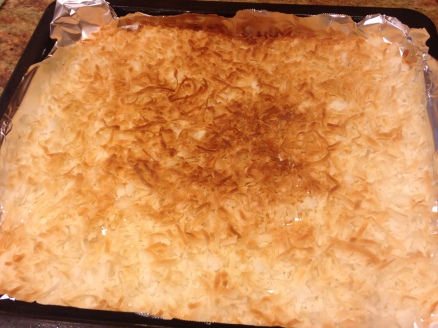 Then combine the caramel and toasted coconut, and your filling is complete. It will harden as it cools, but I actually found it a little easier to work with once it had hardened because it didn’t stick to the spoon/my fingers as much.

To assemble the hamantaschen, remove the dough from the freezer and let it sit for a few minutes until it is easily roll-able. Lightly flour a clean, smooth, and dry surface and use a rolling pin to make an even layer of dough about 1/8-1/4 inch thick. Then use a round cookie cutter (I recommend 2.5-3 inches) to cut rounds of dough.

Transfer the rounds to a parchment paper lined cookie sheet and drop about 1/2 tablespoon of filling in the center of each round. 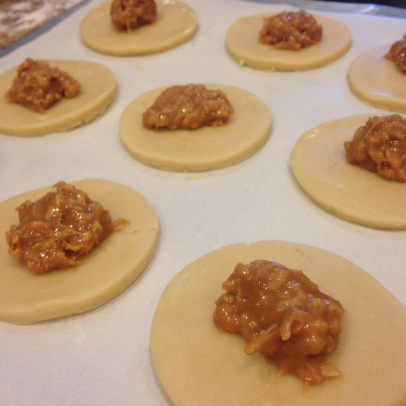 Then, lift three sides of each circle and pinch together to create triangle shapes, leaving a medium-sized hole in the center so the filling shows through.

Bake for 12-15 minutes on 375 until the cookies are golden brown. Allow to cool completely before removing from tray. While waiting for cookies to cool, melt two cups of chocolate by microwaving in 30-second increments and stirring in between, until melted and smooth. My favorite chocolate to use for melting and dipping is Merckens Candy Coating chocolate. Here is a link to the exact chocolate that I used for this recipe, though it is sold on many websites and you can probably also buy it in a local candy store. It melts really, really smoothly and dries very nicely too. I would recommend using either these or other chocolate specifically made for dipping, such as Wilton Candy Melts. If you use chocolate chips you’ll likely have a more difficult time getting the chocolate to melt smoothly, which will lead to frustrating dipping and less professional looking cookies. Once cookies are completely cool and chocolate is melted smoothly, dip the bottom of each cookie in chocolate. Place the cookies chocolate-side down on a sheet of wax paper and do not move until the chocolate is completely dry!

Once all the cookies have been dipped, drizzle the remaining melted chocolate on top of the cookies. Feel free to drizzle any way you choose, but for a neater and more uniform look I recommend filling a zip loc bag with the melted chocolate and cutting a small hole in one corner to squeeze the chocolate out of. I used one of these fancy bottles for mine. 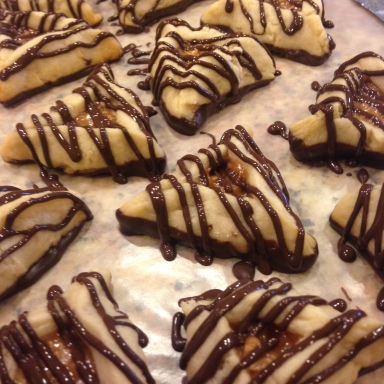 *If using Butter Flavor Crisco, make sure to add 2 tablespoons of water (as per directions on the Crisco container). Using Crisco is nice because it doesn’t need to be refrigerated so it is easier to incorporate with the sugar.

**See notes on melting chocolate in my post above. I used dark chocolate but feel free to use whatever kind of chocolate you prefer or have on hand.

***If you find that your hamantaschen are coming apart in the oven, it helps to brush the edges of the dough with egg whites before you pinch the sides together. I used egg whites at first because the original recipe called for it, but I stopped using egg whites halfway through and had no problem with the cookies.

Shout out to this downed hamantaschen, which I dropped into the bowl of chocolate and then destroyed in the process of trying to rescue it.